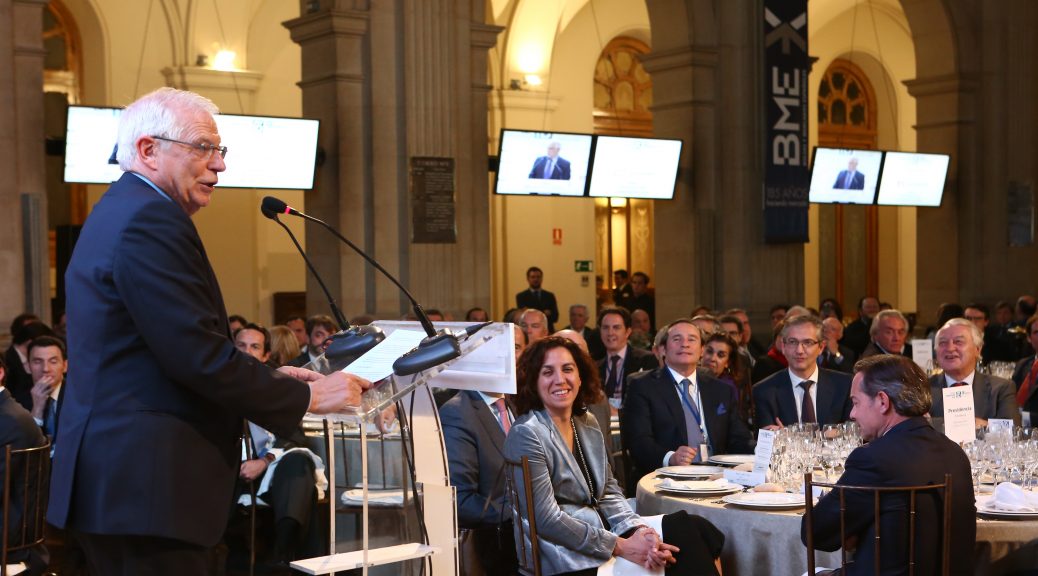 15/01/2019. Josep Borrell, foreign affairs, European Union and cooperation minister, has lead the dinner of the Spain Investors day (SID) IX Edition, forum where the principal business on the stock exchange meet with the largest investors that opens the economic year. The minister has outlined, in the presence of over 150 investors and managers of the main Spanish companies, the greatest position that Spain enjoys in the international scope: “We are the 14th country on foreign investment over the world”.

In front of a crowded park of the Palacio de la Bolsa, Borrell has expressed the Spanish government vocation on foreign investment, besides he has pointed the economic advantages that his geostrategic position provides: “We are the bridge between Europe and Africa”.

In addition, the minister has also emphasised the relation between social cohesion and economic growth, explaining that “the most open countries over the world and most exporter are also the most united ones” to highlight the Spanish position.

On the other hand, the governor of the Bank of Spain, Pablo Hernández de Cos, has explained that “over the last years we have achieved a current account surplus really positive, that´s the main reason of the Spanish international position”.

Black Toro´s president, official sponsor at the dinner, Ramón Betolaza, has outlined that “the SID is an essential date of the Spanish calendar”, at the time that he reminded the assistances that his company intention is to help restoring the Spanish finance security. Likewise, Betozola has reminded that 90% of his firm investors are international. On the flip side, Black Toro´s president has reinforced the idea that his objective is to ensure the companies´ visibility and guarantee the long-term value.

On his behalf, SID´s president, Benito Berzuelo ha positively valued SID´s evolution and the Spanish economy, always hand to hand over the last nine years. “When we create this forum, Spain and the European Union were leaving his worst crisis period”. Additionally, he has insisted that “we still need meetings like this, forums of dialogue, where business introduces their reality”.